Unfortunately, there are no efficient ways to dispose of plastic products made with synthetic polymers, so they land up polluting the environment, posing a global ecological threat.

While reusing and recycling plastic into new products can solve part of the problem, there any many plastics that can’t be recycled and such a huge volume of plastic waste to work with, it is far from a viable solution.

Many are choosing to go zero-waste or going plastic-free by choosing products that come in reusable, refillable containers. A popular example is refillable zero-waste shampoos and body washes.

There are also some great new products, like disposable diapers that are completely biodegradable, that are reducing the volume of new plastic waste, but what do we do about the rest?

Some kinds of plastic will take up to 1000 years to degrade, when using processes like chemical, thermal, photooxidation, and biodegradation. Plastic hasn’t been around long enough for us to know for sure and those who invented it will be long gone by then, making it the problem of future generations.

Cue the plastic-eating mushroom. Scientists have discovered that microorganisms can play an important role in ridding the planet of waste-plastic, as over 90 genera of bacteria, fungi, and actinomycetes have the ability to degrade plastic.

The mycelium of Pestalotiopsis microspora can eat plastic products as its primary food source and survive without air or light. This makes it a marvelous mushroom for cleaning up the plastic in our landfills and littering our environment.

“Imagine a world where a pollution-free future
lies in the roots of a fungus.”

If this sounds too good to be true, you will be intrigued by the contents of this blog.

What is this Plastic-Eating Mushroom?

Students from Yale University discovered a mushroom species that can eat plastic. The mushroom, called Pestalotiopsis microspore, comes from the Amazon rainforest. Astoundingly, these mushrooms can survive on plastic alone. The fungi consume polyurethane and convert it into organic matter. This plastic-eating mushroom can also live without oxygen – making it the perfect candidate for cleaning up landfills.

Solving two of Earth’s most urgent problems – plastic pollution and food shortages – some plastic-eating mushrooms may be edible too.

A study conducted by Katharina Unger of Utrecht University found that the Amazonian fungus is not the only one that can eat plastic. Some other common mushroom species like the Oyster mushroom, which is edible, can also consume plastic. Unger claims that once the mushroom has eaten everything up, there is no plastic left in the mushroom, and it tastes “sweet with the smell of anise or licorice“.

Unger invented a device called the “Fungi Mutarium” that can grow these edible plastic-eating mushrooms. It is a plastic-eating-mushroom-recycling-kit prototype.

More studies will determine the long-term safety of consuming these mushrooms.

Other Benefits Associated with Plastic-Eating Mushrooms

Another report by scientists in London found that, even if the mushrooms are not edible, they have other uses, including using them to make furniture and building materials. These studies also found that plastic-eating mushrooms remove pollutants from the soil and convert waste into biofuels.

Plastic Made from Mushrooms

On the flip side of the plastic-eating mushroom breakthrough, there is a company that uses mushrooms to grow plastic alternatives. Plastic is ever-present in our lives, but, as we have learned, it is a non-biodegradable pollutant. Mushrooms may provide a sustainable alternative.

A recent study found that humans have produced 8,300 million metric tons of plastic to date – 25,000 times the weight of the Empire State Building. 79% of that plastic has ended up in landfills or the ocean. Plastic contaminants are showing up in drinking water worldwide, wiping out wildlife and causing illness amongst humans in the process.

“Humans are addicted to plastic,” says Gavin McIntyre, chief scientist and co-founder of Ecovative, a company set on reducing our dependence on plastic by making biodegradable alternatives.

Ecovative products are grown from mycelium (networks of fungal or mushroom roots), unlike most synthetic plastics, which are made from crude oil.

Naturally, fungi break down waste and use it to propagate. Ecovative harnesses this process and grows the mycelium into various shapes and structures. They have created furniture and packaging materials like MycoFoam, their trademarked Styrofoam substitute.

The company’s operations are based on the synthesis of industrial-scale production and applied biology. Ecovative buys wood chips or agricultural waste from regional farms and uses it to create a suitable medium for cultivating mycelium.

The agri-waste is mixed and treated with mycelium, which digests the waste, enveloping it in a fibrous-root-matrix. The mycelium-coated particles are sorted into different size and shape trays that serve as molds. After only a few days, the mycelium hardens into solid structures that take the shape of molds. The structures are then dried out so that they don’t develop into mushrooms and form spores. The resulting material is nontoxic, home-compostable, naturally fire-resistant, and suitable for use in various applications.

Scientists have discovered a strain of bacteria that eats the plastic used to make bottles. This process is known as fungi plastic degradation. According to an article published by National Geographic, we are drowning in plastic; therefore, a discovery like this could give our planet and its inhabitants a second lease on life.

The effects of the plastic-eating bacteria are still negligible – it’s a long way from being the solution to the plastic crisis – but it shows that bacteria and other natural products can be used in environmentally friendly recycling.

Where do Plastic-Eating Mushrooms Grow?

Pestalotiopsis microspora’s plastic-eating mushroom spores’ ability to break down polyurethane was discovered in two distinct P. microspora strains taken from plant stems in the Yasuni National Forest in the Ecuadorian Amazon rainforest. A group of student researchers led by professor Scott Strobel, a molecular biochemist from Yale, made the discovery.

Pestalotiopsis microspore is the first fungus species found to be able to live on polyurethane in anaerobic conditions. An anaerobic organism, also known as an anaerobe, is any organism that does not require oxygen for growth. These qualities make this fungus a candidate for bioremediation projects involving large quantities of plastic. Bioremediation refers to remediation technologies for the treatment of soil and groundwater using microorganisms.

Forward-thinking scientists believe that every household could own a home recycling kit where these truly magical mushrooms will consume plastic on a smaller scale. Simultaneously, community recycling centers could have larger-scale fungi systems built in to make use of this process.

The aim would be for every home to have some sort of Fungi Mutarium and that they would become as commonplace as other kitchen appliances.

What is a Fungi Mutarium?

In a project funded by the Bio Art and Design Award and generously supported by Utrecht University, a Fungi Mutarium was developed. This prototype grows edible fungal biomass, mainly the mycelium, as an innovative food source.

Fungi is cultivated on specially designed agar shapes called “FU”.  Agar mixed with starch and sugar acts as a nutrient base for the fungi. The “FUs” are filled with plastics. The fungi digest the plastic and overgrow the whole substrate. The shape of the “FU” is designed to hold the plastic and offers the fungi a suitable surface on which to grow.

Step-by-step guide on How a Fungi Mutarium works:

Step 1
UV-treated plastic is placed on the bottom of the mutarium. The UV light activates the degradation process.

Step 3
UV-sterilized plastic is put into the “FU “to be digested.

Step 4
Fungi sprouts in a liquid nutrient solution known as ‘macerate‘ are extracted from the Fungi Nursery.

Step 5
Macerate is dropped into the “FUs “to ignite the growing process.

Step 6
After a few weeks, the mature “FU “can be taken out to be prepared and eaten.

You can view how the mutarium works in this video: 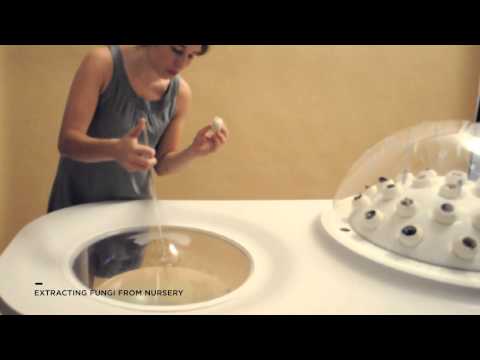 The Benefits of Growing Food this Way

Fungi can degrade waste materials such as plastics, converting them into edible fungal biomass or substances that are at the very least useful and not harmful. Because the mushrooms break down the ingredients in the plastic without storing them, the mushrooms will be safe to eat.

As overpopulation, climate change, and plastic pollution become prevalent, we need to revolutionize food production. More research is needed so that people can cultivate food under extreme environmental conditions without causing further harm. You can read more about the impact of overpopulation and the resultant food shortages and climate change in this blog.

Can I Grow Plastic-Eating Mushrooms at Home?

We have a long way to go before having a Fungi Mutarium or mushroom-powered plastic-devouring garbage-disposal unit in every home. In the meantime, you can experiment with your own plastic-eating mushrooms.
If you find this process intriguing and you would like to contribute to a plastic-free environment, you can buy Pestalotiopsis microspora mushrooms in liquid culture syringes.

The mycelium of Pestalotiopsis microspora can eat plastic products as its primary food source and survives without air or light. This makes it the perfect mushroom for cleaning up plastic pollution. There is no reason why every household can’t have its own environmentally friendly plastic disposal station.

It’s good to know that scientists are working on environmentally friendly ways to deal with plastic pollution. Every human being who uses plastic is part of the problem; whether we like to admit it or not. We should be part of the solution too.

Is there such a thing as a plastic-eating mushroom?

Yes, there is. The mushroom, called Pestalotiopsis microspore, can survive on plastic alone. The fungi consume polyurethane and convert it into organic matter.

How does the Plastic-Eating Mushroom Eat Plastic and at What Pace?

In the same way that mushrooms break down every substrate they grow on, plastic-eating mushrooms break down plastic in a way that is beneficial to the environment, unlike other chemical recycling processes.
Until recently, we believed that plastic is not biodegradable. However, if the newest research is anything to go by, soon we will be eating mushrooms that ate away unwanted plastic.
It may take several months for fungi to consume a piece of plastic, but that is way quicker than the 1000-odd-years it is reportedly going to take some plastics to biodegrade.

Possibly the biggest challenge may be convincing people that a fungus that has devoured a pile of plastic is edible. Hopefully, once everyone understands that the mushroom is not actually consuming the plastic but rather breaking it down, they will be more willing to give these fungi a try.

No. However, it is useful in degrading polyurethane, a polymer composed of organic materials used in the manufacture of a number of products such as adhesives, hard-plastic parts, foam seals and gaskets, foam seating, and many others. The fruit bodies grow with cream/white colored stem and cap. Yellow Mushrooms: Why They Appear and What to Do (2023 Guide) The 6 Best Self-Watering Planters in 2023 and Beyond (Review) Straw Mushrooms: The Easy Guide to Identify, Use, Cook, and Grow in 2023 Organic Gardening: The Easy-to-Follow Guide for 2023